This site is partly dedicated to my father, Ordnance Artificer George Smith (above left, at Gibraltar in 1942, before Malta convoy Operation 'Pedestal'), lost in the sinking of HMS Charybdis off the Brittany coast on 23rd October 1943. Few men survived and just a handful of bodies were washed ashore on Guernsey. When they were buried by the German authorities, thousand's of Channel Islander's attended, and ever since, Guernsey has commemorated the cruiser's loss, usually with a Royal Navy guardship present - an unusual honour given the thousands of British warships and auxiliaries sunk in two World Wars alone.

In 2003, Guernsey Post issued this stamp (©Guernsey Post Limited 2003) bearing a painting of HMS Charybdis as well as Hunt-class escort destroyer HMS Limbourne, torpedoed at the same time (by T-type small destroyers, not E-boats as often described). I am grateful to Guernsey Post for permission to reproduce this rather beautiful stamp.

Naval-History.Net is also dedicated to my grandfather, Chief Yeoman of Signals George Smith DSM. He joined the Royal Navy in 1904, and was sunk twice in World War 1 - destroyer HMS Medusa and cruiser HMS Cassandra. Post-war, he served with the North Russian Expeditionary Force 1919, cruised the Baltic in 1921, served on HMS Curlew on the America & West Indies Station 1922-25 and HMS Durban on the China Station in 1926-28. He joined the Royal Naval Shore Signal Service in 1928 and served as a Chief Officer through World War 2 and on to 1948.

He was an early and avid photographer, and perhaps because of his experiences as a Signalman, a natural communicator. A lovely man, I am proud to make all his work available on the Internet. He would have appreciated and understood the value of the Web. 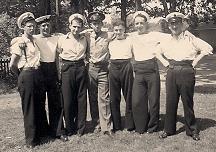 To the many families across the world, American, Australian, Canadian, New Zealand, South African and others, who shared their homes with the men and women of the Royal Navy throughout World War 2.

When HMS Rodney was being refitted in Boston in mid-1941, members of the crew were entertained by local families. This includes Bill Patterson, Louie and Reggie Pope (all above) staying with the great grandmother of Deb Cruse - with thanks to Deb, 14 Feb 2012.

Naval-History.Net started in 1998 with books written by Gordon Smith:

'an invaluable reference book on the war at sea .... as well as an informative guide to naval strategy', Lloyds List  - see Royal, Dominion & Allied Navies in World War 2, Month-by-Month across all Theatres

'contributed tremendously to my knowledge of the war', Francois Heisbourg, Director, International Institute for Strategic Studies, London - see Battle Atlas of the Falklands War 1982 by Land, Sea and Air

'arguably the best military history site currently online .....' - BBC family history magazine Who Do You Think You Are

'having visited the site I am aware first hand of its quality ..... Chris Page, Head of my Naval Historical Branch is hugely impressed ..... Admiral Sir Jonathon Band, then First Sea Lord

Associated with the National Museum of the Royal Navy

Since its early days, Naval-History.Net has been considerably enlarged and enriched by the researches of Don Kindell from the United States, the late Lt-Cdr Geoff Mason RN, Dr Graham Watson and other contributors whose names will be found on the pages they helped make available. Over the 30 or more years, Don and Geoff produced an estimated total of 15,000 pages of work, most of which is now online. You can find out more in:

Naval History and the Internet - the Story on One Site

"Knowledge not shared is lost" - with thanks to Don Kindell

Based on British and Other Navies Day-by-Day 1939-1942, Ship Movements, Actions and Losses  by Don Kindell

Volume 4: Germany Sends Russia to the Allies, June to November 1941

Part 1 above, is in effect the index to this Part 2, which identifies ships sunk and damaged, land battles, how killed or died etc.

Joint runner-up in the

2010 Mountbatten Award of the Maritime Foundation

BATTLE ATLAS OF THE FALKLANDS WAR 1982

from "Battles of the Falkland's War" by Gordon Smith, published by Ian Allan, 1989

Use of material - please acknowledge www.naval-history.net.

Archives - can be found at British Library/WebArchive and Internet Archive/Wayback Machine.